Africa, specifically Ethiopia, is largely considered to be the birthplace of coffee. The story tells of a goatherd named Kaldi that lost track of his goats. He found them “dancing” after eating mysterious red berries. Impressed by their vigor, he ate some of the beans himself and joined them in dancing. Kaldi then brought the fruit to monks who made them into a tea and coffee was born.

While the story may not be historically accurate, experts can agree that coffee very likely originated in Africa and spread around the world. The African continent is incredibly diverse. From the volcanic region of Rwanda to the Ethiopian forests where coffee first started growing, Africa is known to produce arguably the best coffee in the world. 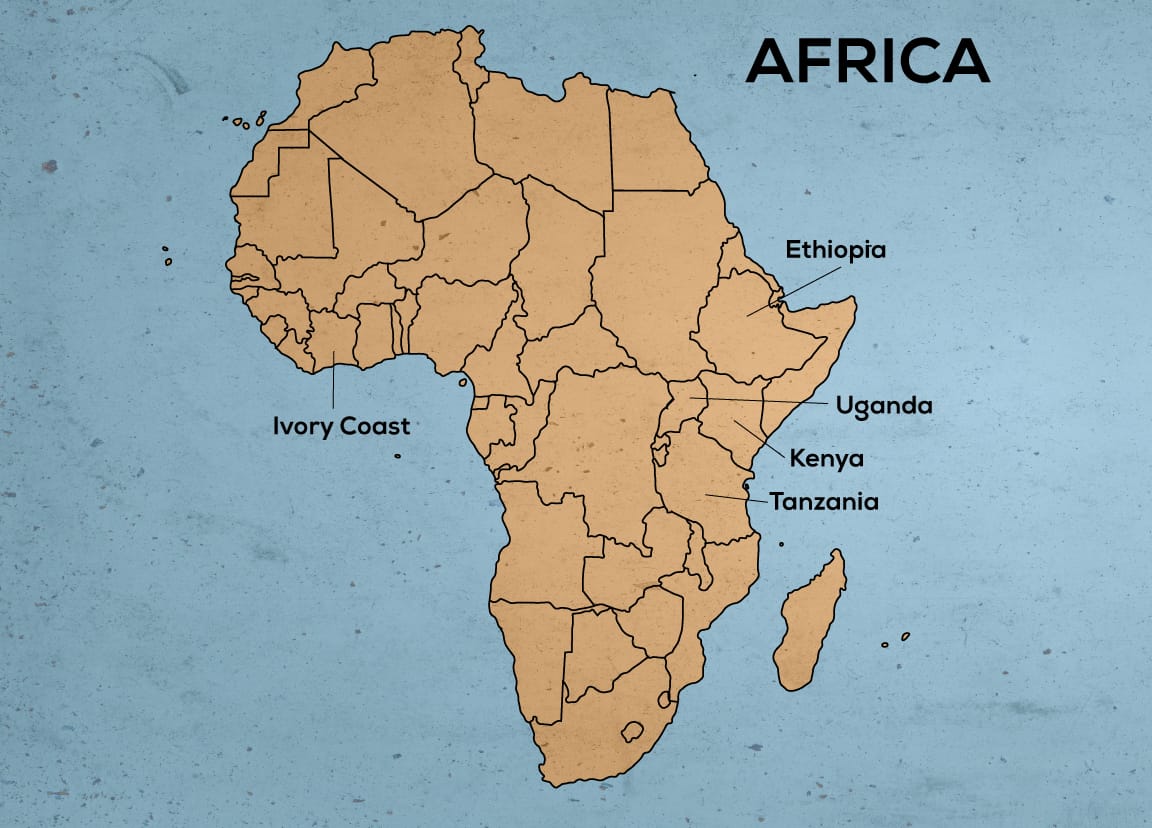 There is more than a myth when it comes to the claim that Ethiopia is the birthplace of coffee. Ethiopian coffee contains 99% more genetic material than coffee from the rest of the world. Most of this material has not been identified or categorized so the plants are called “heirloom varieties”.

Coffee is more than just a drink to wake you up in Ethiopia. It is traditionally consumed in a ceremony that goes back over 1000 years. In this ceremony, beans are roasted fresh before being ground by a mortar and pestle. The coffee is then boiled several times until the host finds the coffee is perfect. It is served in small cups with lots of sugar. During this tradition, it is ok to drink one cup or three cups, never two. The ceremony takes over 2 hours and is meant to bring families or friends closer.

Despite being so close to Ethiopia, Kenya’s commercial coffee industry didn’t start until the 1900s. Even though it is one of the youngest coffee industries in the world, Kenya is looked upon as being one of the most consistent growers and is often ranked in the top 5 of the world’s best coffee.

Kenya’s strict grading system is the main reason for all of this quality. The beans are scored on a scale from 1-10 and also rated by size on a letter scale. Beans rated under the highest quality, AA, must meet the standard of size and quality before being released for sale.

Tanzania is another country that didn’t start commercially producing coffee until the 1900s. Coffee was first brought to the region in the 1600s but was chewed as a stimulant and was even used as money. It was under German colonialization that coffee became a cash crop for the Tanzanians. The coffee production then grew under British rule and eventually, the farms were managed by locals.

Tanzania is the 19th largest coffee grower in the world, producing about 122 million pounds of coffee. About 70% of that is arabica grown on the hills of Mount Kilimanjaro. One of the most commonly exported coffees from the region is the Tanzanian Peaberry. Peaberry coffee contains only one bean, instead of the typical two per coffee fruit. This allows the single bean to absorb twice the nutrients during its growth for a superior flavor.

Riding the waves of political and economic instability, the Ivory Coast’s coffee production has seen its ups and downs. In the 1970s, the Ivory Coast was the 3rd largest coffee exporter in the world. That came to a halt throughout the 2000s as a call to ban their coffee exports was announced to stop funding the nation’s corrupt leader. The ban worked and now the region is in recovery. The government now predicts a 400% growth by the end of 2020.

It’s not likely to see the Ivory Coast in any specialty coffee shops, as they produce mostly Robusta coffee. Researchers from the region have recently developed a hybrid that they call “Arabusta”. After a rough start, the future is looking bright for the Ivory Coast.

Like the Ivory Coast, most of Uganda’s coffee production grow Robusta coffee, but Arabica coffee is on the rise from this region. Robusta coffee grows so well here that even wild coffee trees can be found. Farmers in Uganda have even been able to grow specialty-grade Robusta coffee. Though it is rare, it is redefining the way we think about specialty coffee.

Uganda is another country in Africa that is making great strides due to its coffee industry after political instability. In 2015, Uganda passed Mexico to become the 8th largest coffee exporter globally. They are becoming a country to watch as they continue to surpass all expectations.