The Art of Being an Expert Barista

You’ve probably been to a cocktail bar and been served by one of those incredibly skilled bartenders — the people who can simultaneously mix great drinks and put on a performance. But did you know that it’s not just bartenders who do this? Baristas, the artisans of the espresso machine, do the same, in little-known competitions called throwdowns. In fact, we have a Thursday Throwdown every week here in San Diego, where baristas from across the city display their well-honed abilities. 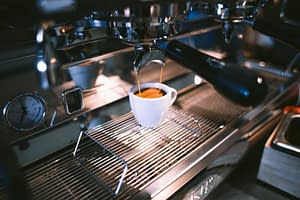 There’s one ability that ranks above all others: making a good espresso. As espresso shots form the basis of all your lattes, cappuccinos, and many other drinks, so it’s crucial to be able to get it right, every time. A good barista knows pressure to tamp the espresso grounds in the portafilter, the correct amount of water, temperature and time to pull the espresso shot.

So if the espresso is the foundation that all baristas need to know, then what skills does it take to make it at the top level? Well, competitors at the World Barista Championship, now in its 17th year, are tasked with preparing four espressos, four milk drinks, and four original signature drinks, in a 15-minute performance set to music. These baristas are then judged on five criteria:

This competition format allows baristas to demonstrate both their ability to flawlessly execute the fundamentals, but also their knowledge and innovation in creating new and unique coffee drinks. Berg Wu, the 2016 World Champion, created a drink with an orange and honey reduction, Earl Grey tea and espresso, before infusing it with mandarin essential oil through an aromatizer. It remains to be seen if anyone can top this at the 2017 World Championships this November in Seoul, Korea.

The most visible skill on display is the latte art. If you’ve ever been served your coffee, looked into your micro-foam and seen a heart, a rosette, or a tulip, then you’ve seen barista latte art.

These simple designs are known as Free Hand Pours, where the barista uses only their steady hand and trusty milk pitcher. In the Barista World Latte Art Championships, however, things get more creative, as competitors are also judged on a Designer Pour, for which they are permitted to use a stylus and textured milk to draw with.

In the World Championships, these pours are judged on their symmetry, creativity, visual appeal, and difficulty. If that reminds you of olympic sports like gymnastics or ice-skating, then you’re exactly right — and like these athletes, latte artists are also judged on their professionalism, ability, and stage presence.

Cooperative Coffee Roasting – A New Model in the Coffee Industry