Central American coffees are very easy to find throughout the United States, due mostly to proximity. Though they are common in coffee shops, there is nothing common about their flavors. Coffee from Central America is known for being balanced, bright, and clean.

Many factors make Central America a prime location for coffee growing. It located in the heart of the “Bean Belt”, which are two imaginary lines North and South of the Equator where coffee is most commonly grown. The region also has vast mountain ranges, rich volcanic soil, old-growth forests, and micro-climates that are very predictable. All of these factors come together to produce a bean that can easily be served as a Single Origin or blended beautifully with another comparable roast. 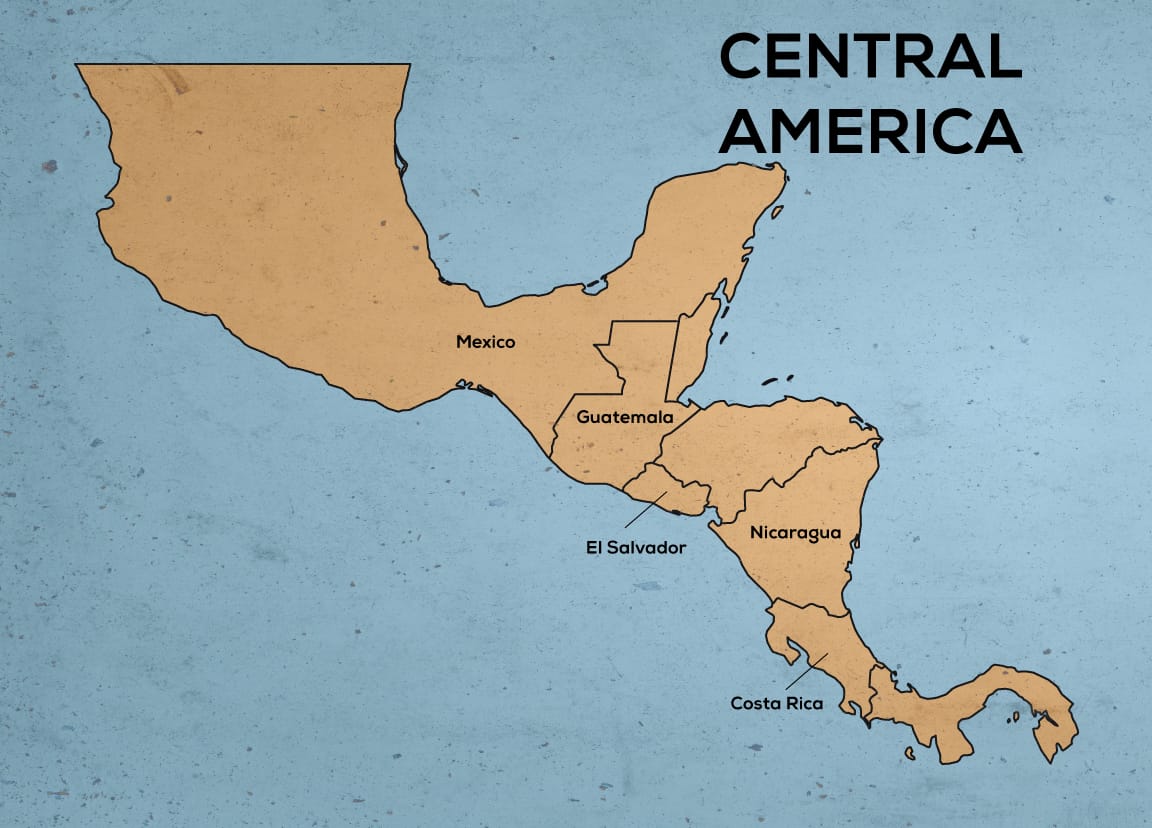 While Mexico is generally regarded as part of North America, the lower part that dips into the Bean Belt is considered part of the Central American coffee region. Coffee came to Mexico in the late-1700s from Cuba and the Dominican Republic. Twelve Mexican states continue to grow coffee, but most of the production happens in the Southern states of Oaxaca and Chiapas.

Mexico takes its coffee production very seriously and is currently the #1 producer of certified organic coffee in the world. Mexican coffees are known to typically have low acidity and a heavy body with tasting notes of Chocolate, Spice, and mild Nut flavors. They are common for blends but are strong enough to be served on their own.

Coffee was also introduced to Guatemala in the late 1700s but it didn’t pick up until the 1860s when European investments gave new life to the industry. These farms have since been divided up among the locals and now coffee is an integral part of Guatemala’s economy and culture.

Guatemala is known to be one of the most climatically diverse countries in the world, despite its relatively small size. The region’s volcanos constantly deliver large amounts of essential nutrients back into the soil with each eruption. Guatemalan coffees generally have complex flavor profiles but apple, citrus, and floral aromas are common throughout.

El Salvador was among the Central American countries to receive coffee in the late 1700s, but it didn’t see a boom until indigo production slowed in the early 1800s. By 1970, coffee was 50% of the countries GDP. The country, unfortunately, was ravished by a civil war in the 1980s. By the time peace came in the early 90s, many farms had been destroyed and the country has struggled to regain its foot in the coffee industry.

The civil war wasn’t all bad for its coffee production. While neighboring countries were experimenting and planting new varieties of coffee, El Salvador stayed traditional and now produces many “old varieties” of coffee. This allows them to market their coffee as rare and exceptional while they regain their reputation in the specialty coffee world.

Nicaragua was one of the last Central American countries to start growing coffee in the mid-1800s. The industry took its saw its first decline during the Cold War when America banned Nicaraguan coffee to try and prevent the spread of communism. The nation saw a few more hits to the industry through the Nicaraguan Revolution from the 1970s-1990s, but the largest was when Hurricane Mitch hit in 1988.

Nicaragua has had a period of stability for over 20 years now and the coffee industry is recovering as a result. Coffee production now accounts for about 15% of the nation’s labor. Coffee from Nicaragua is known for its medium acidity and body with a gentle sweetness.

Coffee production came to Costa Rica in the late 1700s along with most of Central America. The government embraced coffee as a cash crop for the nation and by 1829 coffee had passed cacao, tobacco, and sugar as a source of revenue. Costa Rica is currently the 14th largest coffee growing country in the world.

Costa Rican coffees have a reputation for having the best flavor profiles in Central and South America. The high altitudes and nutrient-rich soil produce a bean with a full body and lively, citrus acidity. The country also puts a large emphasis on sustainability with a lot of Organic, Fair Trade, and Rainforest certified beans on the market.