Coffee As An Antioxidant

These days everything seems to be harmful to our bodies. However, there are coffee health benefits in your morning cup. Would you ever believe that coffee is a good source of antioxidants? Coffee, as a great source of antioxidants has recently been getting a lot more attention for its health promoting benefits. So maybe you won’t have to cut back on your favorite pour over after all.

Compounds called free radicals cause damage to cells in your body. They do this to certain DNA and proteins by breaking them apart and disrupting the cell structure. Free radicals contain unpaired electrons causing them to be highly reactive. They can be man-made or natural elements caused by chemicals produced in the body from normal functions or environmental toxins. Unfortunately, these compounds create oxidative stress which can create higher risk of various chronic diseases.

When you think health, you more likely than not think fruit and vegetables. Using your daily coffee as an antioxidant may be more beneficial. According to Superfoodly, a cup of coffee has similar antioxidant levels to a serving a fruit. It may be more common to have a second cup of coffee than a lot of fruit in one sitting. This is how coffee can provide more antioxidant power. Coffee, as an antioxidant, contains polyphenols which are also good at preventing cancer, diabetes and heart disease. As a result, you can feel a whole lot better about that daily, or maybe twice daily, cup of Joe. 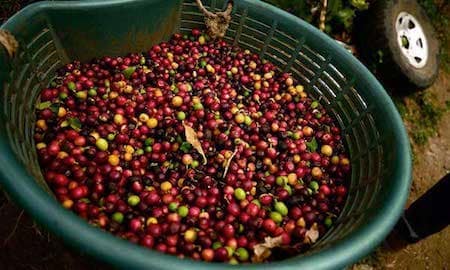 Within the Western diet, coffee and tea beverages are essentially a staple. Although there are dietary sources higher in antioxidants, coffee is consumed on a much more regular basis. In a study done on polyphenol intake, 79% of consumption came from beverages, while 21% came from food. There have been numerous studies done worldwide concluding that coffee is the biggest source of antioxidants within the populations.

Although the antioxidant power of coffee is high due to consumption, it is important to know to get other sources as well. Coffee contains a certain antioxidant while other fruits, vegetables and spices have different antioxidants. Certain berries usually have the highest concentrations of antioxidants. However, it is difficult to eat a large amount of berries per day. This is why coffee as an antioxidant can be the easiest source for busy lifestyles. A healthy diet should consist of a balanced intake of these various antioxidants. Try adding some cinnamon or other spices to our favorite medium roast coffee, which contains the highest levels of antioxidants.