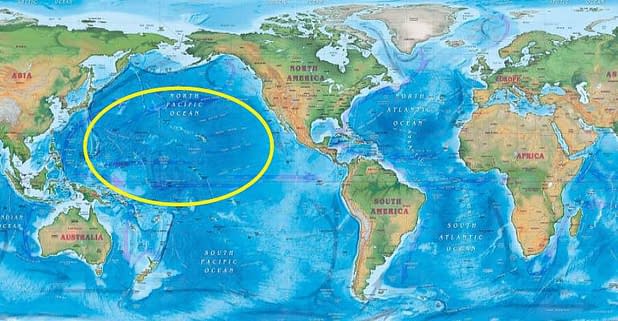 In the North Pacific Ocean there are over 79,000 metric tons of floating debris. Humans have created this immense patch of trash which mainly consists of plastic. In addition to the huge amount of debris, scientists are concerned about the ability of the plastic to break down properly. In this modern day, humans are becoming more aware of alternatives to their current plastic consumption. However, efforts need to focus on getting rid of the trash we’ve already created. Therefore, scientists are creating a fix for the Great Pacific Garbage Patch.

The first fully synthetic plastic took over in 1907. Leo Baekeland introduced Bakelite as an alternative electrical insulator. During this time, the United States was growing exponentially. Also, following World War II, the United States placed an immense emphasis on preserving natural resources. Scientists found numerous ways to make a plastic substitute for everything humans had previously known. With innovations such as nylon and plexiglass, U.S. plastic production during the 1950s increased by 300%. In almost every growing market, mass production of plastic through products like packaging, single-use items like straws and even replacing steel in cars created extreme convenience.

“The possibilities of plastics gave some observers an almost utopian vision of a future with abundant material wealth thanks to an inexpensive, safe, sanitary substance that could be shaped by humans to their every whim.” –Science History Institute

However with great power, comes great responsibility. With all the excitement of an infinite world, manufacturers had no way to predict the impact that plastics would have. During the 1960s, the world’s awareness of environmental problems began to grow. This is also when plastic debris was first noticed to be contaminating oceans. Discovered in 1997 by Charles Moore, the Great Pacific Garbage Patch is the largest pile of floating trash.

But how did a patch of trash larger than the size of Texas go unnoticed? Before the 1970s, Americans had no real concept of the environmental impact of plastic pollution. In 1974, citizens of University City, Missouri offered the first curbside recycling program in the country. Before this, for more than 50 years of plastic production, proper plastic disposal had been almost nonexistent. Even more so, recycling plants that received recyclables mixed with trash sent all of it to landfills, with much of it ultimately finding its way to the waters.

The Science Behind Gyres

“An ocean gyre is a system of circular ocean currents formed by the Earth’s wind patterns and the forces created by the rotation of the planet.” –National Geographic 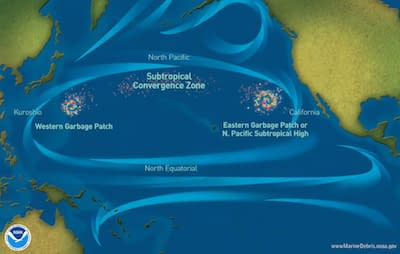 Gyres create circular motions causing the debris to move to the center of the systems. In the center of the gyre, a stable point is reached where the plastic accumulates. And though these systems are natural forces, plastic is not. Therefore, the material that does not break down, remains stuck in the center of the gyre. People throughout the world make and use plastic. That means that gyres move water polluted by plastic across the globe. Ultimately, these natural systems have created not just the Great Pacific Garbage Patch, but five ocean areas that are now growing with plastic.

The Reality Through Research

When the Great Pacific Garbage Patch was realized, scientists described the mass as “an island of plastic”. Although researchers have found large plastic debris, that is not all that is found. Although plastics do not degrade, they do break into smaller, thinner pieces. Sunlight creates chemical reactions which also cause the plastic to emit harmful toxins into the water. The National Ocean Service describes these microplastics as “small plastic pieces less than five millimeters long which can be harmful to our ocean and aquatic life.” The microplastics are nearly impossible to see and mistaken by marine life as food.

Through extensive research, The Ocean Cleanup obtained 1.2 million plastic samples from the Great Pacific Garbage Patch. Researchers gathered this plastic by dragging large nets behind 30 vessels through a portion of the area. It took interns over two years to study and classify every piece of plastic. They concluded that over 80kg of plastic grew into an area 3 times the size of France.

Hope On The Horizon

Boyan Slat has a plan for all of that plastic. The Ocean Cleanup will launch their plastic-collecting technology for the first time, starting September 19, 2018. Acting as a coastline, a 2,000 foot floating tube will attract surface debris. Then, boats will carry away this debris to be sorted and recycled. The Ocean Cleanup claims that this effort will clean up half of the debris in 5 years.

Critics of Slat’s technology show concern that collecting the plastic will not be enough. Jennifer Provencher believes in creating more methods to stop the flow of plastics into the ocean more so than eliminating the waste. Other critics say it would be wiser to focus on alternatives to petroleum-based plastics instead. In addition, the world must adapt to have better waste removing practices in the first place.

However, Boyan Slat and The Ocean Cleanup remain hopeful. With a design that considers marine life, the plastic-collecting technology is the biggest effort yet to eradicate the Great Pacific Garbage Patch. Our world has been creating and polluting plastics for far too long. On September 19th, the way the world deals with plastic in the Great Pacific Garbage Patch will change. With the help of this technology, we can begin to change the way we impact the earth we live on.

Time to start your day with a great tasting breakf

You can almost smell it through your screen. We're

This post is for all of you. We were all incredibl

Some days you just don't feel like coffee. That's

Our online menu is fully customizable. We made it

Our retail bags have been flying off the shelf lat

Our full menus with photos and descriptions are av

With more people brewing at home these days, we're

Time to start your day with a great tasting breakf

You can almost smell it through your screen. We're

This post is for all of you. We were all incredibl

Some days you just don't feel like coffee. That's

Our online menu is fully customizable. We made it

Our retail bags have been flying off the shelf lat

Our full menus with photos and descriptions are av

With more people brewing at home these days, we're