The Rise and Fall of Trans Fats

In the 1950’s following WWII, manufacturers made margarine; an alternative to butter with a longer shelf-life. Margarine also doesn’t require the use of cow products, making it a lot cheaper to make. Then, specialists began to catch on to saturated fats.

“Saturated fats are molecules that have no double bonds between carbon molecules because they are saturated with hydrogen molecules.” –American Heart Association 2016

Both saturated and trans fats reside in animal products like beef, lamb, and dairy. However, the majority of trans fat consumed today are a product of manufacturing. When oils are hydrogenated, unsaturated fats combine with hydrogen molecules, creating trans fats. Food manufacturers use partially hydrogenated oils to increase texture and shelf-life of foods.

Coming Back to Health 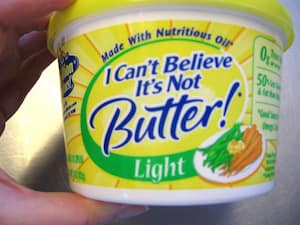 Up until the 1990’s there wasn’t a whole lot of information on trans fats. That’s why, even to this day, they remain in somewhat of a grey area.

The best way to avoid trans fats is by reading labels. Marketing in the food industry can be misleading and sometimes unclear. Occasionally, food manufacturers will advertise their product as having “No Trans Fats”. However, according to the FDA, companies could claim no trans fats if their product had 0.5 grams or less per serving. For instance, I Can’t Believe It’s Not Butter claims 0 grams of trans fat. Compare that, to the ingredient list that lists partially hydrogenated soybean oil as the third ingredient. So, by reading the Nutrition Facts Panel consumers can clearly see what is going into the product they’re buying. 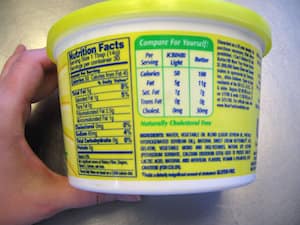 So, what’s with the ban? Beginning in the 1990’s, nutrition advocacy groups started to put pressure on the industry to remove partially hydrogenated oils. And some 10 years after that, the FDA began enforcing manufacturers list trans fats, saturated fats, and cholesterol on food labels.

The National Academies of Sciences’ Institute of Medicine stated in 2002 that any increase in intake of trans fats increase heart disease risk. Meaning, no safe level of trans fat in the diet exists. Following this statement, in 2013 the FDA announced considering removing PHOs from the Generally Recognized as Safe (GRAS) list for foods. They received full support from consumers. However, the institution met much resistance from food manufacturers.

Big food manufacturers have relied on partially hydrogenated oils to make their products more appealing for decades. Not to mention that not using them would most likely create a higher cost to the companies. This is what has caused most of the deception in labeling and marketing. Following 2006 a number of food companies began to voluntarily reduce their use of trans fats. This in part was due to health advocacy groups unveiling the effects of these fats. McDonald’s came out with information that they found a trans-fat free oil to implement in all stores by 2008. Prior to 2008, when only some stores had the oil, employees were instructed not to disclose which stores had the good stuff. This is just one example of misleading information and deceptive marketing in the food industry.

In 2015, the FDA finally released that partially hydrogenated oils were not considered GRAS.

“Removing PHOs from processed foods could prevent thousands of heart attacks and deaths each year.” –U. S. Food & Drug Administration 2018

The Takeaway About Partially Hydrogenated Oils

The partially hydrogenated truth is that PHOs cause serious health problems. They increase cholesterol levels, which in turn increases our risk of stroke and heart disease. These bad fats cause inflammation throughout the body. Big food manufacturing companies are against banning fats because they are cheaper to use. Although trans fats still exist naturally, we as consumers can control that easily. Implementation of a ban on PHOs in food manufacturing is the first step to getting rid of them entirely.