The history of coffee production in El Salvador is marked by the country’s political instability. No other Central American region has depended on coffee like the nation of El Salvador. The sharp boom and bust cycles have caused locals to call coffee “el granola de oro” or “the grain of gold”. 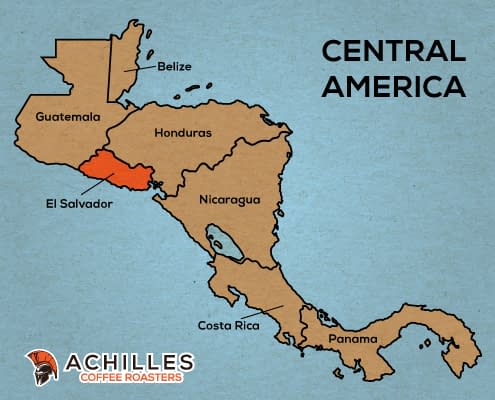 In the 1880s, Coffee replaced indigo as the nation’s largest export. By the 1920s, coffee totaled 90% of the country’s exports. However, the global depression of the 1930s almost crippled the small nation. The coffee industry ended up surviving and became known as one of the most advanced coffee producers of the time.

El Salvador is also the birthplace of the Pacas and Pacamara varietals of coffee. Pacas is a natural mutation that occurred between Bourbon and Caturra varietals. Pacamara was then bred from Pacas and Maragojipe to develop a variety of Typica with larger beans. The results were a success and now Pacamara beans can be found throughout the world.

Despite its small size, El Salvador is the 19th largest coffee producer in the world today. While coffee farmers still face many challenges, organizing into Fair Trade cooperatives has helped farmers receive better prices for their premium coffee. By banding together, the coffee farmers can increase their infrastructure while decreasing losses that could typically end an independent farm.

Located in the western region, with altitudes ranging from 500 to 2,365 metres, this is one of the most renowned regions of El Salvador and home to El Salvador’s first Denomination of Origin. This region includes coffees on and near El Salvador’s famous Santa Ana volcano (which erupted as recently as 2005) and includes some of the country’s larger, more well-known farms.

Originally home to the Quetzalcotitán civilisation, this region includes San Salvador Volcano and its rich, volcanic soils. The region takes its name from the Salvadoran Balsam (an aromatic resin) produced there and benefits from altitudes of 500 to 1,900 meters.

Home to highly varied altitudes, ranging on average from 500 to 2,000 metres, this region is home to the San Miguel or Chaparrastique Volcano with the highest peak of 2,130 metres. The region is the third largest producer in the country.

This region is located to the east of Ciudad Barrios, between San Miguel and Morazan, with altitudes averaging between 500 to 1,663 meters. Known for its clay-like soil, farmers here often have to dig large holes and fill them with rich soil to plant new trees.

Located in the Northern Morazán department, bordered by Honduras to the north and the Torola valley to the south, this region is known as the ‘land of evergreen forests’.

The coffee-growing zone here is quite high, rising between 1,000 to 2,000 metres. In the very north of the country, it is known for coffee of very high quality.

Located between La Paz and San Vicente, Bourbon and Pacas are common in this region, with the San Vicente Volcano rising to 2,130 metres. One of the newest coffee producing regions in El Salvador, the area is nonetheless well suited to farming coffee and is home to several notable farms.