Coffee is now grown all over the world, but where did it come from? Ethiopia is known as the birthplace of coffee because it is home to the naturally-occuring Coffea Arabica plant. In approximately 850 A.D., a goatherd noticed peculiar behavior from his goats after eating the leaves and red cherries from an unknown plant. The goats seemed to be happily dancing around which seemed good enough of a reason for the goatherd to try the cherries himself. He then presented the cherries to a monk. The monk had trouble staying alert during late hours of prayer, so upon the discovery of coffee, he was ecstatic. Through showing fellow monks, the idea of roasting the beans to make a beverage came about. And then eventually, Ethiopian coffee beans grew into the trade industry in the 15th century, making its first stop in Yemen. 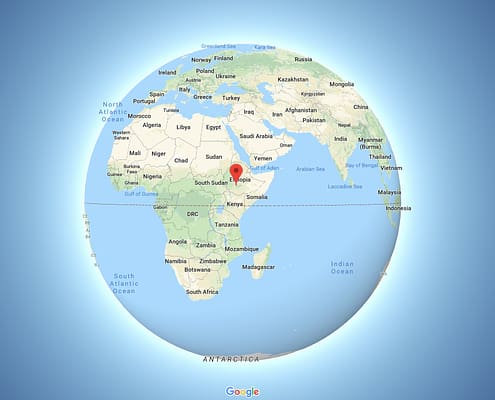 Coffee is an integral part of the culture in Ethiopia. Hours are spent preparing and drinking the beverage through the coffee ceremony. This tradition is considered one of the main ways to create social connections with others in Ethiopia. This ceremony is performed multiple times a day and usually takes 2-3 hours in its entirety. To begin the ceremony, coffee beans are roasted by pan and ground by hand. Then, the coffee is brewed from a special pot over an open flame. This tradition displays respect and friendship and has allowed Ethiopians to share and discuss things going on in their community for over a thousand years. Being such a cultural staple in Ethiopia, 50% of the coffee produced is consumed domestically.

Seeing as Ethiopia is the home of coffee, it makes sense that the climate is perfect for growing the coffee trees. Over a thousand varieties of beans grow due to high elevation mountainous regions. Because of the perfect growing conditions that exist in Ethiopia, most coffees are processed naturally. This means that the pulp of the coffee cherry is not removed before drying. Although there are 3 major coffee growing regions within Ethiopia, the flavor profiles of these range immensely due to microclimates and processing methods.

Located in the fertile highlands of the Rift Valley, this growing region consists of over 20 different areas that each have different microclimates and altitudes ranging from 1,500 to 2,200 m.a.s.l.(meters above sea level). There is abundant rainfall, perfect growing temperatures and fertile soil due to shade-grown trees. Because of the variance just within the one growing region there is comparable variety of cup profiles across Sidamo coffees, but tend to have vibrant acidity with floral and citrus notes.

Apart of the Sidamo growing region, Yirgacheffe produces such well-known coffees, the Ethiopian government trademarked its micro-region. Most of the coffees are grown at 2,000 m.a.s.l. In heavily forested areas. Coming from about 26 cooperatives in the area, most of the coffee is wet processed.

Ethiopian coffee beans from this region is trademarked as one of the original grades in Ethiopia and known for its high quality. Processed naturally on small farms in the Eastern part of the Ethiopia, coffee is classified as either longberry, shortberry, or Mocha. These coffees tend to have intense fruity flavors like blueberry and banana with a heavy mouthfeel. For this reason, most coffees from Harrar are used in blends as opposed to single origins.

Ethiopian Coffee beans from the third, less-known but trademarked growing region of Ghimbi are wet processed. This region is in the western part of Ethiopia and coffee is known to have a heavier body with sharp, rich acidity.