Introduced in the 1600s, coffee seedlings were given to the Dutch, who colonized Indonesia at the time. The Dutch gave the seedlings to the Governor of Java to begin cultivation. This growing effort of 1704 became the first in the whole of Indonesia, along with the country’s first production for exportation in 1711 through the Dutch East India Company.

During the 18th century, when Java was controlled under the Dutch East Indies, the Dutch had set up five large estates for coffee production. All five of these plantations still produce and export coffee today. These massive production efforts helped to make Java one of the leading coffee producers in the world, until the 1880s. The coffee leaf rust plague came to Java and completely devastated growing efforts. The type of coffee plant of Coffea Arabica is the most susceptible to getting the rust leaf disease, which was all Java was growing. With the influx of the disease, the Dutch suggested swapping Arabica with the disease resistant robusta and liberica varietals of coffee. Although, these varieties tend to produce lower quality product, by using them, coffee production in Java was able to thrive in comparison to other countries plagued by leaf rust. 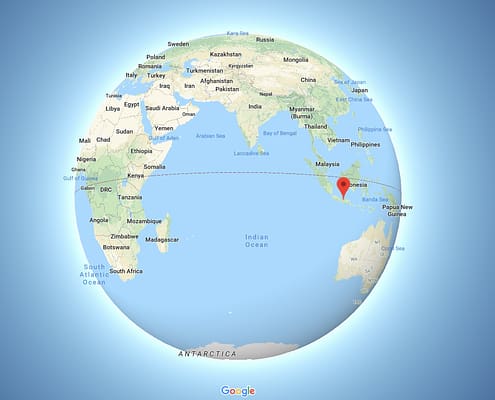 Following the plague of the leaf rust, the Indonesian government helped to replant Arabica varietals in the large plantations. However, due to the leaf rust, efforts weren’t as focused on Arabica, seeing as only about 10% of the country’s production efforts are Arabica.

Of the five large estates created by the Dutch in the 1700s, four were revived to produce Arabica. These plantations comprise more than 4000 hectares of land with The Djampit Estate being the biggest producer. The Djampit estate is located on the Eastern Plateau of the island and grows coffee between 1100 and 1600 m.a.s.l. Coffee is processed through the wet washed method and then dried in the sun. Flavor profiles of coffees from the Djampit estate exhibit honey, peach and almond flavors with low acidity and chocolate aromas.

Also located on the Eastern Plateau of Java, coffee from The Blawan Estate is grown at 800 – 1500 m.a.s.l. Producers at this plantation also use the wet processing method and dry beans in the sun. Coffee is harvested from May to September and maintains cup profiles of cinnamon, tobacco and grape with low acidity and chocolate aromas.

Built in 1894, The Estate of Pancoer yields about 350 tons of coffee each year. Located on the Eastern side of the island of Java, coffee is grown at 650 – 1550 m.a.s.l. Processed using the wet method, coffee is put out on drying racks in the sun to finish. Coffee from the estate of Pancoer exhibits flavors of pepper and chocolate with a medium body and balanced acidity.

The Kayumas Estate was built in 1900 and has a history of producing high quality coffee in Indonesia. Also on the Eastern Plateau of Java, coffee is grown at 750 – 1550 m.a.s.l. Also processed under the wet method, coffee from Kayumas exhibits bright malty and nutty flavors with a bright acidity.