The east-African country of Kenya borders the birthplace of coffee, Ethiopia. However, coffee wasn’t introduced into Kenya until 1893 when missionaries brought the crop from Brazil. The establishment of the colony of Kenya under British control began in 1920 and lasted through 1963. During this time, only white colonists were able to grow Kenyan coffee beans with Africans providing free or cheap labor. Following the Mau Mau war, Kenya gained independence in 1963. With newfound freedom, Kenyans were now able to take part in coffee production. However, growing was heavily regulated with a limit on how many plants one could grow.

Prior to Kenya’s independence, an open auction system was run by government to control sales and establish pricing based on quality. The pricing hierarchy helped to bring economic value and quality distinctions to Kenyan coffee beans. However, this also meant that all coffee grown had to be centrally processed and marketed allowing the best quality coffees to be exported and poor quality coffee sold for consumption. With Kenyans not being able to receive the quality products that they contribute to, a disconnect grew between farmers and product. 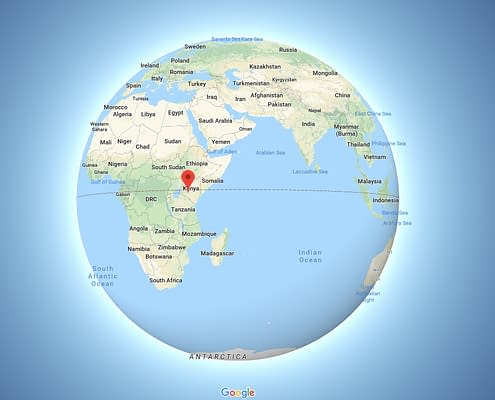 In 2006, legislation passed allowing negotiations to be made directly from producers to buyers. Called the ‘second window’, the new system empowered producers, while eliminating the middlemen who would previously take portions of income from farmers. Although, the auction system deterred many Kenyan coffee producers from realizing their full potential, it still represents about 90% of coffee sold in the country. However, the legislation of 2006 made it more difficult to hide fees to producers. Today, two-thirds of production efforts come from small-scale farms with over 6 million people relying on the coffee industry.

Although the political and socio-economic atmosphere of the coffee market in Kenya has built barriers, the country maintains ideal growing conditions to produce the crop. Kenya uses over 160,000 hectares of volcanic land with high elevations from 1400-2000 m.a.s.l. To sustain Kenyan quality coffee, a protocol for processing has been established country-wide. First using the wet processing method, beans are then fermented for up to 36 hours.

Coffee produced in Kenya is said to be the most balanced, yet the most complex of coffees. With wine-like acidity and sweet fruit flavors, these coffees have a medium body with deep flavor. Main growing areas include Mt. Elgon, Nyeri, Murang’a, Embu, Kirinyaga, Marsabit, Meru and Kiambu. Kenya’s climate typically allows for two harvesting seasons which allows for better productivity.

Although Kenyan coffee production has not been the most accessible for Kenyans, the quality of product that they maintain is continuously driving the market. With well-known varietals created by Scottish researchers like SL-28 and SL-34, Kenyan coffees will create high-grade revenue and hopefully stimulate their socio-economic status globally.