Coffee came to Papua New Guinea during the 1800s when the German administration introduced it for experimental and botanical observation. However, first official documentation of the cultivation of Papua New Guinea coffee beans came in 1899. Exportation to Australia began in 1901, but a larger scale effort began in the 1920s. Most efforts began as a colonial research experiment which paved the way for the major coffee producing that the country does now. Following World War II, an even bigger shift came to the market. Most experimental plantations were sold, and refitted to produce on a commercial scale. Ever since, the industry in Papua New Guinea has grown to include over 2.5 million people, about half the population. 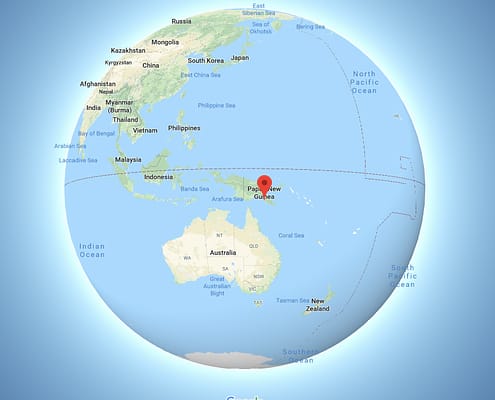 Even though half of the population rely on Papua New Guinea coffee beans production for income, Papua New Guinea remains the 17th largest coffee exporter in the world. And although, the market was established through large plantations, these larger efforts have opened up the industry for smallholder farmers. Making the country one of the most notable producers in the world, smallholders produce about 85% of the coffee in Papua New Guinea.

Within the country, it is evident that most efforts are lacking in basic infrastructure and access. The Coffee Industry Corporation Limited (CIC) is a coffee board that was founded in 1963 to assist smallholder farmers through research and overall regulation of the market. The CIC has helped production in Papua New Guinea through aiding the half of the population relying on coffee production.

Of the 19 provinces in Papua New Guinea, 15 cultivate coffee plants. The regions of Eastern Highlands, Western Highlands, Jiwaka, Morobe and Simbu produce 90% of the country’s coffee.

With a mountainous terrain and wet, tropical climate, the Eastern Highlands are the 2nd largest producer within Papua New Guinea. Coffee in this region is characterized as clean, full body with spicy notes of chocolate and lemon.

The largest province in the country, Western Highlands, is mountainous with altitudes up to 2800 m.a.s.l. This region also has two seasonal climates and tropical conditions, creating a perfect environment for quality coffee. Coffee from the Western Highlands accounts for about 45% of the country’s production. This coffee can be characterized by toffee nut flavors and tropical smooth finish.

Another mountainous region located in the Central Highlands, sits Simbu, which in the local dialect means “thank you”. With immense rainfall and high temperatures, the region maintains a tropical climate. Most inhabitants of Simbu are dedicated to the coffee industry. All 6 districts within Simbu participate in the Coffee Flavor Profiling Project. Coffee from Simbu exhibits flavors of melon and honey with a full, complex body.

Concerning coffee production, Papua New Guinea focuses efforts on their processing methods to maintain quality. This is why they export 99.9% in green beans. Following harvest, cherries are depulped using wet processing. Then, the beans endure a fermentation process that takes about three days. Within these three days, farmers wash the beans every 24 hours. To enhance flavors, beans are placed to dry in the sun. Coffee in Papua New Guinea is graded under classifications of AA, A and X. All coffee within the country follows the specific standards for wet washing and fermentation that is enforced to stay on the market. This ensures that each and every coffee purchased from Papua New Guinea is the quality that is expected.