Although it doesn’t get recognition as its neighbors, Kenya and Ethiopia, Tanzania has been producing coffee of the same quality for hundreds of years. Arabica seedlings were first introduced to the region from Réunion Island and were planted in the Bayamoyo and Mogoro regions. Initially, the coffee grown was not used to drink, but instead to extend alertness and work longer hours by smoking, boiling, or chewing the beans. 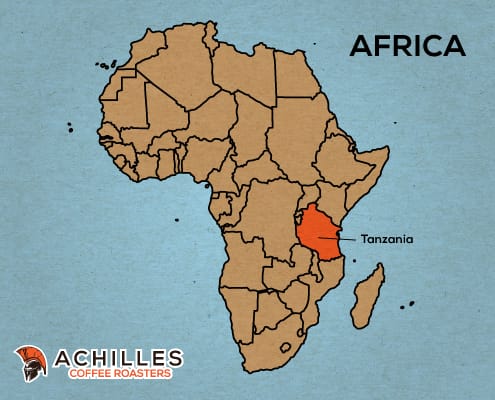 Once established as a successful crop, German colonizers began growing coffee on the slopes of Mount Kilimanjaro around 1893. When Tanzania gained its freedom in 1961, public leaders saw value in the export of coffee and began turning the farms into state run cooperatives. The system was incredibly inefficient and the coffee industry was slowly privatized. Today, it is estimated that 450,000 smallholders are reliant on Tanzania’s coffee industry. It supports about 11% of the country’s population.

Tanzania is regarded as having not fully reached its potential as of producer of specialty coffee. Wild coffee species are still being discovered in Tanzania and the nation is setting increasingly more strict guidelines on quality and sustainability. It is likely we will see much more specialty coffee come from the country in the years to come.

Though coffee is grown throughout Tanzania, there are only a handful of prominent areas. These major regions include, Arusha (Meru), the Moshi District (on the slopes of Kilimanjaro), Oldeani (in the Arusha region), and Pare (the high plateau between Lake Taganyika and Lake Nyassa).