Introduced by the Spanish settlers, coffee was brought to Mexico in the late 1700s. The first cultivation of Mexican coffee beans started on plantations in the southeast of Vera Cruz. However, for Mexico, the exportation of gold and silver was much more important at the time. Because of international conflicts with Mexico at the time, coffee cultivation began to grow. In 1860, wealthy Europeans gained land through the first land registration with intentions for long-term coffee cultivation. They forced small farmers into mountains while tricking Indigenous men to work as indentured servants on land that was originally theirs. 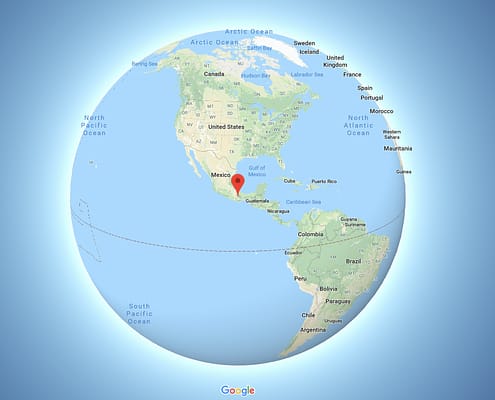 Following the Mexican Revolution, reforms gave thousands of plots of land to farmers. These reforms also freed indentured servants who then, in turn brought their knowledge and seeds to grow coffee for their own communities. In 1973 the National Coffee Institute of Mexico (INMECAFE) was created. The INMECAFE was designed to help small farmers to stimulate the national economy. The organization helped guarantee purchases, provided transportation, as well as helping to get their product into the international market. For small coffee cultivators in the countryside, coffee production grew by almost 900% in some areas. Due to a drop in the price of oil, Mexico’s top exported good, government ended its support of coffee cultivation. Along with the fall of INMECAFE in 1989, coffee farmers were ruined.

The first Mexican cooperatives were created in the early 1990s which helped farmers with processing, marketing and transportation. Farmers also began to use organic certification being that the price was much more stable than non-organic coffee. Now, most coffee grown in Mexico is certified organic and Fair Trade by default.

Known to produce some of the highest quality coffees in the country Chiapas has a hot, tropical climate. Volcanoes help bring minerals to the soil composition. Near the Guatemalan border, the sharp acidity and medium body is similar to fine Guatemalan coffees.

Coffee from Oaxaca is grown on the sides of the central mountains. This gives coffee from this southern state its light acidity and similar body.

In Veracruz, coffee is grown in lowlands and in the nearby mountains. With light, nutty flavor and a chocolatey cup profile coffee from Veracruz is highly respected.

The cultivation of coffee in Mexico has been historically difficult. There are over 500,000 lives that depend on the coffee industry in the country where everything is done by hand. In terms of organic certified coffee, Mexico is one of the biggest exporters. However, due to coffee leaf rust, this may change.

In 2012, a farmer noticed the leaf rust in plants near Chiapas. Leaf rust is a fungus that bleaches the leaves of the plant, disabling them from breathing and ultimately growing. The fungus originated in Colombia and is spread through spores carried by the wind. Some say that the rust has become more prevalent because of climate change. The rust can also be more prevalent in sun grown plants versus the traditional shade. Through the reinstitution of the INMECAFE, farmers are now learning better, more sustainable methods to help prevent the coffee leaf rust.