Recently there has been much misunderstanding when it comes to what the names of common espresso based drinks really mean. If you go to Starbucks and order a macchiato you will get one drink, while if you go to any third wave coffee shop and order a macchiato you will get something entirely different. These misunderstandings cause your wonderful barista to make a drink for you that you did not want in the first place! Today I would like to clear up some of these misunderstandings and talking about what some of these drinks traditionally are.

First, let’s start with probably the most misunderstood drink: The Macchiato. If you go to Starbucks and order a macchiato you are going to get a large sugary drink with whipped cream on top. A traditional macchiato is far from that. In fact, a macchiato is a very small drink consisting of a shot (or double shot) of espresso and just a “dollop” of milk on top. The entire beverage only comes out to be between two and four fluid ounces depending on the size of the cup and which coffee shop you go to. If you speak with someone who is very traditional when it comes to their espresso based drinks, they will also tell you that the dollop of milk is only to be foam; however, the standard in most specialty coffee shops in America is a “wet” macchiato. This means that it consists of steamed milk and microfoam on top, which allows the consumer to enjoy some beautiful latte art which the barista expertly pours.

When you add just a little more steamed milk to your espresso than a macchiato, you get a cortado. The cortado comes from Argentina, and if you get a “real” cortado then you are going to be served a four ounce beverage that has a double shot of espresso and steamed milk with no foam. However, the more standard version of the cortado you will find is going to have a little bit of microfoam on it, which allows for some more wonderful latte art. Sometimes, people also refer to the cortado as a gibralter, because it is often times served in a gibraltar glass.

If you add just a little bit more milk to your espresso than a cortado we come to two very controversial drinks: the flat white and the cappuccino. Both a flat white and cappuccino are traditionally served as a six ounce beverage. They both have the same amount of espresso in them (generally a double shot), but they differ in the consistency of the milk poured. A flat white is closer to being a smaller latte than anything else, which I personally like to call a manly latte. It has steamed milk and micro foam; however, it has less foam than a latte would have. The flat white is very popular in New Zealand and Australia, and many people expect the same quality here in the US as they get there. A cappuccino has much more foam than the flat white has. A traditional cappuccino will have one third espresso, one third steamed milk, and one third foam with each third being about two ounces. Seeing as both of these coffee beverages are quite small, next time you see someone order a 20oz flat white you will know it is not true to its nature. 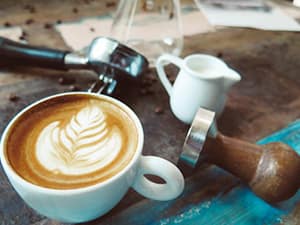 Finally we come to the latte. There are so many kinds of lattes ranging from just steamed milk and espresso, to vanilla lattes, to caramel lattes, to really as creative of a latte that you can come up with to make. Lattes come in many sizes, but they all share the same fundamental feature with each other. This feature is that they all have the same amount of micro foam on them. One way that this can be visualized is a latte has two fingers of foam widthwise, and a flat white has half a finger of foam.

These are the core espresso drinks that any barista should master. From there, creativity is the only limit to what types of delicious coffee drinks you can create behind the bar!