Coffee production in Guatemala accounts for over40% of revenue from exported products. But, the economy of the country has not always relied so heavily on coffee. Before the 1800s, Guatemala traditionally was involved in making natural dyes from cochineal and indigo. This industry supported the country until the invention of synthetic dyes in Europe and 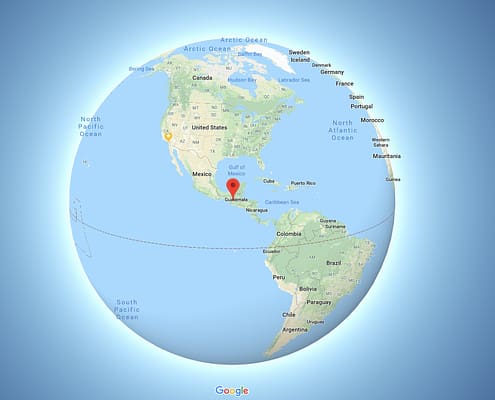 ultimately, the downfall of Guatemala’s economy. With government help, farmers were given plots of land to grow coffee. Guatemalan coffee beans now account for the country’s largest export with over125,000 producers in a space the size of Ohio.

Due to the immense production efforts in such a small area, theAsosiacion Nacional del Cafe(Anacafe) was created in 1960. Anacafe is an organization created by coffee growers to help connect, research and support farmers throughout the country.  Although the country is the 10th largest producer of coffee in the world, a large part of the population still remains in poverty. Through Anacafe, research into sustainable and innovative methods surrounding coffee from farm to cup is emerging. The organization aims to help rural farmers to sustain the coffee industry in the country.

Due to Guatemala’s diverse climate and soil composition for coffee production, there are 8 major Guatemalan coffee growing regions within the country.

Coffee in this region is grown on hills in between three volcanoes. There is little rainfall in the region of Antigua, so mineral-rich volcanic soil that helps retain moisture combats this. Coffees fromAntigua are characterized with flavors of chocolate, caramel and citrus notes.

Near the Mexican border, the region of Huehuetenango is the highest and driest of Guatemalan coffee beans growing regions. Being extremely remote, farmers must process the coffee beans themselves making for distinctive cup profiles of peach, maple and chocolate.

Having the richest volcanic soil of the growing regions, Atitlan creates the highest quality grade of coffee in the country. Coffees from this region present balanced acidity with notes of cinnamon and chocolate.

This mountainous region is also influenced by volcanoes, creating about 4 micro-climates within it. Coffee produced within Fraijanes Plateau maintains cupping notes of milk chocolate and toffee with a sharp acidity.

Characterized by humid, subtropical forests, this northern growing region gets heavy rainfall. Because of this, farmers have innovated ways to create the product they want without the traditional sun-dried method of processing. Flavor profiles of Coban coffee are recognized as blood orange and macadamia with a sweet finish.

Receiving the heaviest rainfall, San Marcos also has the highest temperatures. This creates an average humidity of about75%, helping build distinctive floral notes with prevalent acidity.

The oldest in Guatemala, Nuevo Oriente contains metamorphic rock in its soil. This creates a complex soil composition that influences coffee production. This region is known for the complex body created in Guatemalan coffee beans.

The region of Acatenango is also influenced by volcanic action. The mineral-rich soil helps the newest coffee growing region of Guatemala immensely. The combination of shade and rich soil creates flavor profiles of honey, melon and orange.