South America’s coffee production may be one of the youngest in the world, but in that short time, they now produce most of the coffee worldwide. Coffee spread across the world from Africa and Arabia to Europe, the Far East, and finally to the Americas around the early 1700s.

While flavor can change between regions and farms, South American coffees are generally known to exhibit a slight sweetness with lively acidity. Most countries grow both Robusta and Arabica, but only Arabica qualifies for specialty coffee. 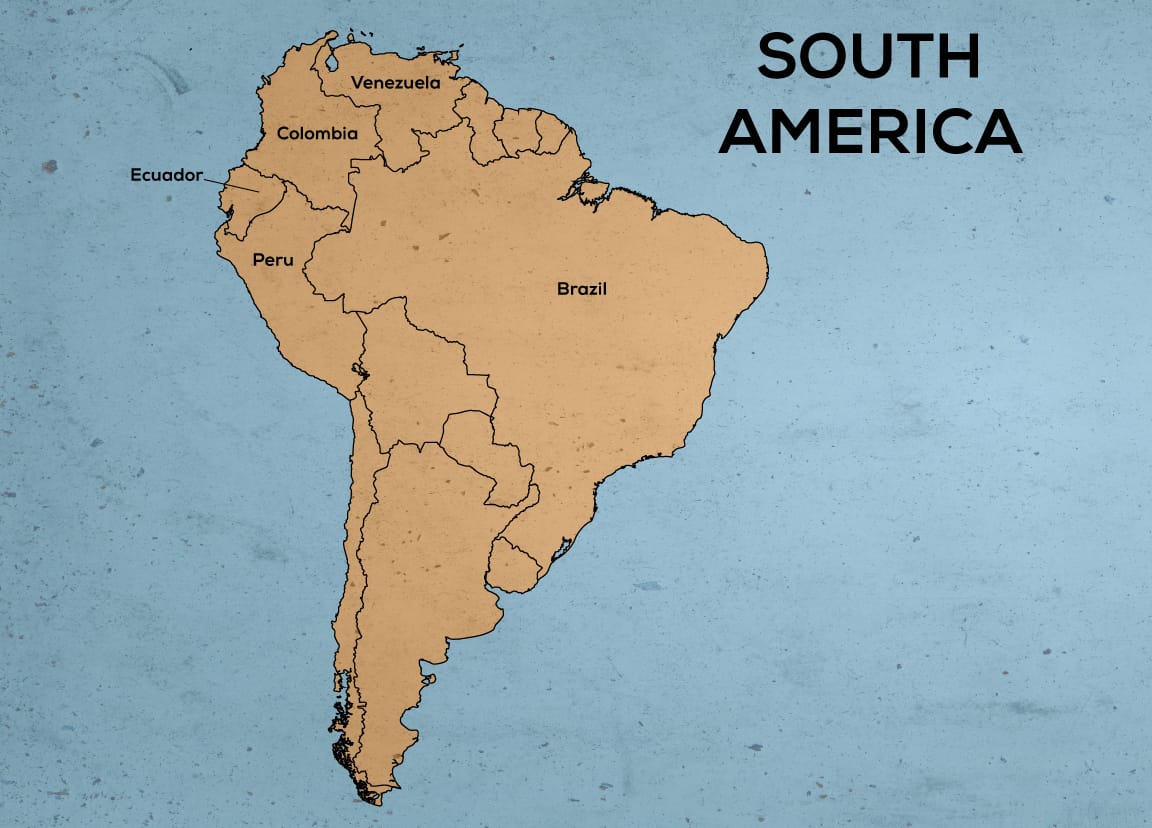 Coffee was first introduced to Brazil in the mid-1700s. They quickly took to the crop and by 1830 they were growing 30% of the world’s coffee supply. Over the years, Brazil has become the largest coffee producer in the world. This mostly due to the sheer size of the country, but Brazil still accounts for one-third of all the coffee grown worldwide.

Brazilian coffee is known for its genetic diversity. Many variates have been discovered or created in the region. Generally, Brazilian coffee is known to have a heavier body, low acidity, and a gentle sweetness. Most of the coffee from Brazil is grown between 900-1,200 meter which qualifies for High Grown Coffee. Very little coffee in Brazil qualifies as Strictly High Grown, a title reserved for the best beans in the world, but it can be found.

Colombia was one of the first regions in South America to start growing coffee in the early 1700s. Colombia contributes 12% of the world’s coffee supply, which is substantial considering they only grow Arabica beans. The highest quality beans are labeled “supremo”, and when mixed with the next highest quality, “extra”, are given the title “excelso”.

The majority of coffee grown in Colombia ranges from 1,200-1,800 meters above sea level, meaning it qualifies as Strictly High Grown. Colombia has a reputation as among the finest grown coffee in the world. These altitudes combined with the soil and micro-climates make for an extremely drinkable cup of coffee.

Peru is the sleeping giant of South American coffee. Coffee was introduced to Peru in the mid-1700s but didn’t become a staple until the 1900s. In a good year, Peru is credited as the 5th largest producer of Arabica coffee in the world.

Peru pays special attention to making sure their coffees can attain Fair Trade and Organic certifications. Because of this and the amount of coffee they produce, Peruvian coffees are among the most affordable organic coffees on the market. A small amount of this coffee is used for the Swiss Water Decaf process, which is the Peruvian coffee we’re lucky enough to serve at Achilles.

Venezuela’s coffee industry had a strong start. Before the 1900s, Venezuela saw its peak as the world’s #3 producer. Unfortunately, poor farming practices lead to soil erosion and the discovery of vast oil reserves chipped away at is coffee production.

Venezuela produces less than 1% of the world’s coffee. Most of the beans now grown are Robusta. Due to instability in the country, it is unlikely that Venezuela’s coffee industry will bounce back any time soon.

Ecuador’s coffee industry is often forgotten as it is one of the smallest. Ecuador is the only country in South America that imports more coffee than they export. This is due to coffee’s late arrival to the region. Oil had taken over as the primary income of the area.

Ecuador is an ideal place to grown coffee with climate, soil, and altitude. A new generation of coffee growers have come to the country and are hoping to bring new life to Ecuador’s coffee industry.