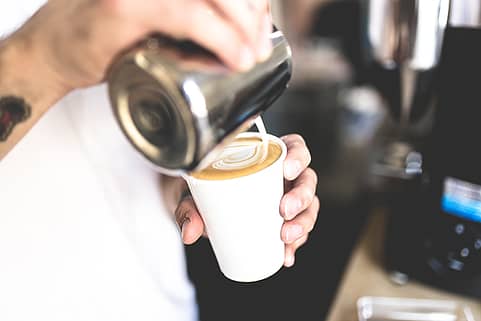 You’ve probably noticed the third wave coffee movement happening around you already, without even realizing that’s what you’re seeing. Increasing numbers of small shops, many of them with the name Roasters in their titles, have opened in neighborhoods across the US. Generally speaking, they tend to be Spartan in appearance, lots of exposed stone or natural wood, overhead Edison lightbulbs and any number of glass or steel contraptions behind the bar. If you’ve walked in, then you’ve noticed that these shops have their own lingo and practices: they talk about different types of roasts, single origin beans, and frequently have a list of adjectives on their menu for each discrete coffee that they brew, adjectives that might seem more at home in a wine-tasting workshop than in a place where you’re picking up your morning brew. And surely you’ve noticed the lattes, where there was once maybe a large blob of thick foam atop your drink, there are now delicate, artistic designs drawn in milk, a heart, a fern, or a tulip.

So what’s going on here? Obviously, the third wave movement of coffee consumption is about more than the aesthetic signifiers listed above, so what is the third wave actually about?

As the name “third wave would imply, it’s actually the third of its kind to come along. The first wave movement of coffee (retroactively named, obviously) refers to the time in which coffee became a widespread American drink, the morning beverage of choice, brewed at home, and readily available on the shelves of most local grocery stores. Think Folgers and Maxwell House coffee. This happened for a few reasons, but developments and innovation in the shipping industry had a lot to do with it.

The second wave of coffee refers to the period of the proliferation of coffee shops across the country, Peet’s in Berkeley is often credited with kicking off the second wave. During the second wave coffee movement, customers were introduced to espresso and the variety of drinks that are espresso derived lattes, cappuccinos, mochas, and macchiatos, to name a few. Coffee shops became places to spend time and socialize, European-style. 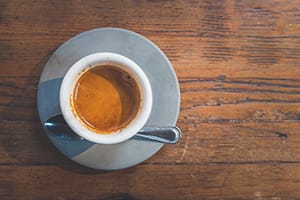 And now we’ve reached the third wave. Third wave coffee, often referred to as Specialty Coffee, was really spearheaded by coffee shops and roasters like Intelligentsia (out of Chicago), Stumptown (Portland), and Counter Culture (North Carolina). In third wave coffee, coffee is treated like a premium product like wine or craft beer. People pay careful attention to its origins and beans are roasted so that the roast highlights the unique qualities of each bean, rather than roasting to create a uniform black coffee taste. This attention to detail carries over to the way the coffee is brewed in third wave shops as well. Baristas are educated and trained to properly pull shots of espresso. In addition to batch brew, coffee is often prepared by the cup such as pour over, with attention to the grind of the coffee, the temperature of the water, and the brew time. This all takes place so that you, the consumer, can truly appreciate the unique cup of coffee in your hands!

The Pour Over Coffee Method